I splurged and bought myself a new toy - a digital camera!

So, now I present to you some non-pixellated eye candy! I took these pictures tonight. See how big my boy is getting? 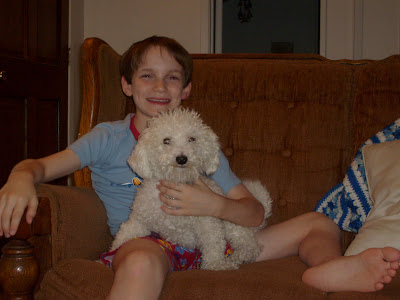 Johnny, Helena and Tim, Oh My!

So, it looks like Jamie and I won't be travelling to the family reunion next weekend after all. The tickets are way too expensive this close to the fact. So, I called my aunt and we're discussing a mini reunion in the spring when I have more money. We're talking like doing a backyard barbeque kind of thing. This is the best I could do, as I had already spent money on tickets for my thanksgiving travel plans. But Patty seemed excited about the idea.

My travel plans for thanksgiving are now set, as well. I'm looking forward to the trip. School starts Monday for me and Jamie, so I'm pretty excited about that, as well.

Well, I've got a touch of a stomach bug right now, so I'm going to go lay down and watch TV with Jamie. Hugs to you all.
Posted by Jenn-Jenn, the Mother Hen at 8/25/2007 No comments:

My right leg from the knee down is almost twice the size it normally is. I accidently stepped on a fire ant hill at Jamie's soccer practice tonight, and apparently I stood there for a while - long enough for the ants to swarm up my leg, biting as much as possible. And these were weird fire ants - each bite is almost the circumference of a quarter, then the area around the bite has swelled up lots, too. And it itches like crazy. I'm keeping my Gold Bond Medicated Cream really close by, otherwise I'll scratch my leg to pieces.

And now for the family angst. I got a phone call today from the newspaper where I used to work. Seems like my aunt, out of desperation, called there trying to track me down. I'd lost touch with most of my dad's side of the family through the series of moves and such. I no longer had their addresses or they had recently moved, meaning the address/phone number I could find on the Internet no longer applied to them. So, anyway, the paper's managing editor had my number because I write to the paper quite often to comment on their stories, and my e-mail tag line has my work phone number in it. So, they called me and gave me Aunt Patty's phone number. Seems that side of the family is several members smaller due to age and disease, and the family reunion next weekend may be several members' last. So, she was begging me, Jamie and Dad to come.

I've greatly missed some members of my dad's side of the family (the ones who DON'T act like my father), and I'm eager to go. So I passed the message on to Dad, and his comment was "F&@K THEM!" then he got all pissy when I said Jamie and I were going to go, and he hung up on me. There are few things on this earth that steam me more than being hung up on, so I called back. And when it rang 20 times, then switched over to automated beeping, I hung up and called back - for 40 minutes until he got tired of hearing his phone ring and finally picked up. I informed him that I didn't appreciate him jerking me around that way, and that if he hung up on me again he will never see or talk to me or Jamie again. I had finally reached my limits on the amounts of crap I would take from him. So, we arranged for me to call him back tonight after Jamie's soccer practice when I wasn't surrounded by co-workers and we could speak frankly.

I called him a bit ago, and he didn't hang up on me, although he made it quite clear he thinks I'm stupid to waste my money to go see them. Just because he's so eaten up by hatred and delusions of grandeur, doesn't mean I have to indulge him in it. He doesn't want to go? Fine, but he shouldn't try to manipulate me into not going.

Oh, and on a good note, I'm taking a vacation day tomorrow so we can do last minute things and have some fun before school starts for me and Jamie on Monday. Bowling may even be on the agenda.
Posted by Jenn-Jenn, the Mother Hen at 8/23/2007 4 comments:

Sad Commentary on the American Mind

Reading this article made me realize just what a sad, sad state the minds of most Americans are in. Apparently, I do at least four times more reading in a month than the average American does all year!
Oh, and speaking of reading, I think I'm going to order Jamie a boxed set of those "Choose Your Own Adventure" Books my brother and I loved so much when we were kids.  I have a feeling he'd get a big kick out of those!
Posted by Jenn-Jenn, the Mother Hen at 8/21/2007 10 comments:

Yes, I Am a Hopeless Romantic (At Times)

So, as I dig out my trusty little bottle of Pamprin at lunchtime, I idly glance at the "Warnings!" listed on the bottle. Among those is this little gem:

"Do not take this product if you suffer from an enlarged prostate gland."

WTF? Am I the only one completely baffled by the fact that THIS warning would be on THAT particular medication?!?!?!?!

UPDATE 4:17 P.M.:
I just found out I got a 97 (A) for the semester in my sociology class. Woo hoo!!!! Go Jenn, Go Jenn, Go Jenn (she sings as she does the 'cabbage patch' dance all the way around the office)! Also, got paid today, so I'll be going out to Sam's Club to buy a certain book I've been DYING to have all summer (Twilight, Book 3).

Oh, and Jamie starts soccer practice tonight. It's a slightly more competitive (and WAAAY more expensive) soccer league. He'll get to train with a personal trainer and do one-on-one training, and all kinds of stuff that I think he'll love. But if he doesn't, I promised him I'll switch him back down to the less competitive recreation league for the spring season. He's a little sad right now, though, because the coach he's had since we moved here decided she wouldn't be coaching this fall, so he'll have a new coach. I think he'll have fun once he gets over missing Coach White.
Posted by Jenn-Jenn, the Mother Hen at 8/14/2007 No comments:

Yesterday I posted my five critiques of other peoples' papers and completed the two assignments for my sociology class. Not only that, but then Jamie unloaded the dishwasher and helped me reload it and run it, then we dragged out the vacuum and swept all the common areas of the house, THEN we mopped all the tile floors. The house we are renting is 1,600 sq. ft, and about 85% of it is tile floors! I'd been so wrapped up in school that I let the condition of the house get away from me. So, after all the homework was done, I thought to myself "I can't STAND this house anymore!" So, we cleaned. It looks pretty, and smells nice too. Now, I gotta go get ready for work.

Just found out I got a 95 (A) for the semester in my English class! Woo hoooooo! I only got an 89 on the research paper, but that's okay, because that's pretty much what it deserved. It was a good paper, but it wasn't by any means a great paper. Anyway, it all worked out 'cause I still got an A. Yay!

I don't know yet the final grade for my Sociology class, but I'm pretty confident that it, too, will be an A.

And on an unrelated note, the cleaning continues. Jamie and I are getting ready to take a quick jaunt to Wally World to get some stronger hooks so we can hang up his hammock. We'll be using the hammock to hang up all his stuffed animals.
Posted by Jenn-Jenn, the Mother Hen at 8/10/2007 7 comments:

On Hiatus Until Saturday

I will not be posting any new blog entries until at least Saturday. There are only a few days of class left and I still have to:

Post above paper to www.turnitin.com so teacher can see I'm not plagiarizing anything

Write posts on BlackBoard regarding use of multiple narrators in THOTS

Organize and submit top ten posts of the week for grading

And all English assignments are due by Thursday night at 11:59 p.m. (except where noted). All Sociology Assignments are due Friday by 1 p.m. And in case you're wondering why I took the time to post - now I have a ready made "to do" list I can check off as I get each assignment done. Be back Saturday.

Verse of the Day Encourages Me and Vacation Plans

I'm glad this is today's Verse of the Day. This is a verse I need to remember when I'm feeling down about myself, thinking "I wish I looked like this, I wish my nose weren't so big, and my laugh wasn't so boisterous" and all that other negative junk I start to think about myself at times. True, this verse is saying that Samuel should NOT like such and such person because his heart is not pure or kind, but I think then the opposite would be true. "Yeah, so-and-so may not look so hot on the outside, but man! She has a heart full of love and she's really super on the inside, so don't look at her with your human eye, look on her with Mine." Yep, that's the thing I take from this verse, and it really comforts me.

In other news, I just got approval from my boss today for the vacation days I requested off. Yay! So, my and Jamie's Thanksgiving plans this year are to fly to NYC to see my brother and his girlfriend on Nov. 17, then on Nov. 21 we'll fly to KY to see relatives from my mom's side of the family, and also to see my "adopted" family, the Meadors! YAY!!!!!! Jamie and I are planning on going to see "the Music People" with them on Turkey Day. YAY! Love to you all, and thank you for the gift of hospitality!!!!!
Posted by Jenn-Jenn, the Mother Hen at 8/03/2007 1 comment: