I took Jamie to the doctor (again) on Saturday for a cough he's had for more than six weeks. He'll start coughing so hard he can't breathe. Diagnosis? On top of everything else, Jamie has now developed asthma. [sigh]
Posted by Jenn-Jenn, the Mother Hen at 6/30/2008 3 comments:

So, Fish tagged me to complete the following Meme:

My memoir would be entitled Planned Chaos: Single Parent by Choice

Update on the Health of a Small Boy

Things are not going so good down here, folks. Jamie went to his pediatric gastroenterologist yesterday, and I'm not at all encouraged by recent developments. We went down there and took the doc Jamie's test results stating that he was positive for H. Pylori (that nasty little bug we'd discussed in an earlier blog post). The doctor made a few noncommittal "hmms" and "uh-huhs" at that. The he asked Jamie again where his stomach hurts when he has pain. Jamie showed him (near the belly button). The the doctor asked me how severe the pain seemed to be. I said, "Bad enough that he's literally on the floor screaming, curled up in a ball, which prompted me to take him to the E.R., where he had those tests," I said, pointing to the lab results we'd brought down with us.

Then the doctor starts poking around on Jamie's stomach, and gets a funny look on his face. He turns to me and, rapid-fire, starts asking me questions. "Does he have headaches? Has he been vomiting? Has he been less energetic than usual?" Of course, the answers were "yes, yes, and yes". Then he says, "okay, I'm ordering a endoscopy and a biopsy. My first opening is in two weeks, and we need to do it then. We should not wait."

Am I missing something here? The more I think back on things, Jamie didn't start having his migraines until after his stomach issues started back last year. Jamie has either thrown up or almost thrown up every single day for the past month. Jamie does not run around with as much gusto as he used to, and he is still tired when I wake him up in the morning, no matter how early he went to bed the night before.

Naturally, I ask the doctor what's going on. And, of course, he doesn't give me any answer other than a noncommittal, "I want to check some things out." Grrrrrr! I know, I know, doctors don't like to scare their patients (or the mommas of their patients) with "maybes". But still, he's freaked me out more by his reaction and complete change in his demeanor from previous visits. Also, it doesn't help that - with so many close family members who have died from some form of cancer or another - that possibility is always lurking in the back of my mind, a dark spectre that haunts my dreams and constantly has me checking over my shoulder.

Another thing that doesn't help is that, as the nurse explained to me, I can't be there with Jamie when they're doing the endoscopy. I can't stay with him and hold his hand. I know he'll be asleep, but I would still rather be there with my baby while they do the procedure. Sitting there in the waiting room will be torture for me. Then, the nurse just HAD to run down the list of possible things that could go wrong during the procedure. For liability reasons, I know she was required to inform me before the procedure, but still. Can you please not make me more paranoid than I already am? Please?

I know there are several of us in the blogosphere who have some serious family and/or health issues going on right now, but I would appreciate thoughts, prayers, positivity, whatever you want to call it, on July 1. Love you all, and you are all in my prayers.

Too Smart for His Own Good

Jamie's last day of school was this past Wednesday. His daycare doesn't start until Monday, so part of his day he's been home alone and the other half of the day he's been playing at a friend's house down the street (where parents are home). For him to be able to go to his friend's house, he's had to spend a specified amount of time doing house work before he can go play. Yesterday, Rachel made the comment that she didn't see much difference in the state of Jamie's bedroom. So today when Jamie called me to tell me he had worked on his room the designated 45 minutes and was going to go play with Josh, he hit me with a whammy. I asked him if there was a noticeable difference in the state of his room. He replied, "Yep. And I even have evidence!" The little stinker got my digital camera and took "before" and "after" photos of his room!

Further proof, folks, that right-wing conservatives are ruining the world can be found in this news story. Apparently, a bunch of nincompoops saw a Dunkin' Donuts ad with Rachael Ray in it, wearing a scarf around her neck. So, a whole bunch of dumbf#cks started protesting, saying her scarf looks like a kaffiyeh - which MUST mean she's endorsing extremism and terrorism. Are you effing kidding me??!?!?!! Really??!?!?! You CAN'T be serious!

Now, I don't much care for Rachael Ray (there's just something creepy about anybody THAT perky all the time), but there is no way in hell I would confuse a fashion accessory with terrorism. Come on, people! Get a life, find something to do other than look for boogeymen under every rock and in every stylish accessory! Oh, no, I can't wear those earrings! Someone might think I was supporting suicide bombers! No, I can't wear that necklace; someone might think I'm endorsing the killing of innocent bystanders! Good grief, people. Please, I beg you, get a new hobby.

Just another reason why I love to read "B.C."

When perusing the news reports today, I noticed a strange likeness... Do you see it too? 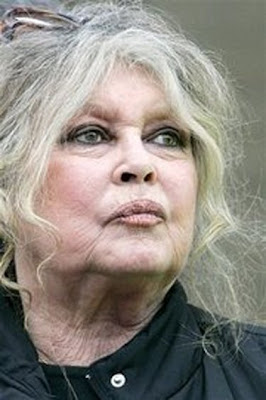 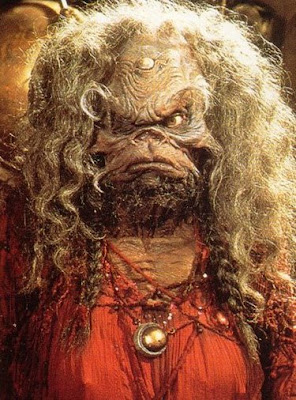 Hmmm.... Who knew a former screen siren would grow up to look like a Muppet from one of my favorite movies?