Some Pics from Comicon

At Comicon on Friday, I got myself some bling....

I feel this is perfect for a Gifted and Talented teacher, don't you?

I also took in a show.

A "Rocky Horror"-esque reenactment of "Doctor Horrible's Sing-a-Long Blog." I did as the title commanded and sang along. Jamie pretended he did not know me.

We also saw some local wildlife.

I was tempted to leave the boys with the Ewok, since they seemed to like it there.
﻿

I do not know these people, but R2D2 was really cool! His head swiveled around and he "talked" to you in response to your voice. This was taken Saturday, when I went back without the boys. Heh heh heh.

I visited their research and development department.

It would seem their researchers have put together this "little" guy to counteract a growing threat of war from across the sea. I tried to convince them this was a bad idea, but no one would listen to me. (Name that Doctor Who episode!)

I was so greatly affected by my two days of exposure that I found myself going native, so to speak. 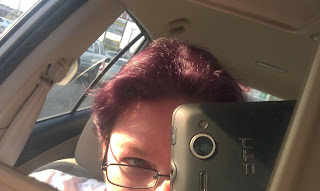 When I got home, I dyed my hair purple as part of the costume I'm going to wear tomorrow. Also because I've wanted purple hair for years, but was working in a job that specifically banned it. I'll put it back to a color that is a little closer to my natural one come August.

This Friday, I will be taking my son and five of his friends to the Texas Comicon. None have ever been. Jamie and a few of his friends are just starting to get into comics. All of them love Star Wars, Star Trek, and various other sci-fi franchises. The good thing about this con is that it encompasses more than just comics. A musical theatre troop will be performing a stage version of "Dr. Horrible's Sing Along Blog," for one thing. For another, scheduled guests include Cary Elwes, Mark Sheppard and Jim Beaver. There will be light saber battles, yo! All of our geek hearts are going pitter patter over this, I can assure you! I will post with a run down of the event and lots of pictures this weekend!
Posted by Jenn-Jenn, the Mother Hen at 6/21/2012 1 comment:

I'm still alive. But to recover from planning and teaching three different lesson plans a day (YO!), then venturing into student teaching in the most inner-city district there is down here (DOUBLE YO!), I had to cease and desist all other activities other than breathing and paying attention to my kiddo once I got home. So, I let the blogs fall by the wayside (again). Sorry!

To catch you up, I am now on summer break, but not really, because I am taking two content area classes and finishing up my portfolio. The aforementioned student teaching with three different lesson plans a day (UGH!) was too much to pile on top of school work. So something had to give. Now I will graduate in August. At the beginning of August, to be precise. And the new teaching year starts a couple of weeks later. I think I should have all my ducks in a row before hiring begins. But if it doesn't happen, I have a back up plan. I have applied to substitute teach next year. So there's that to rely on. Also, this summer I am trying hard to not hold down a full-time job. Instead, I borrowed money up to my ears so that I can stay home and treat my classwork as though it were a job, with a schedule and everything. So far, I'm doing okay treating it that way.

Here's the schedule. I know the pic is hard to see. Sorry about that! 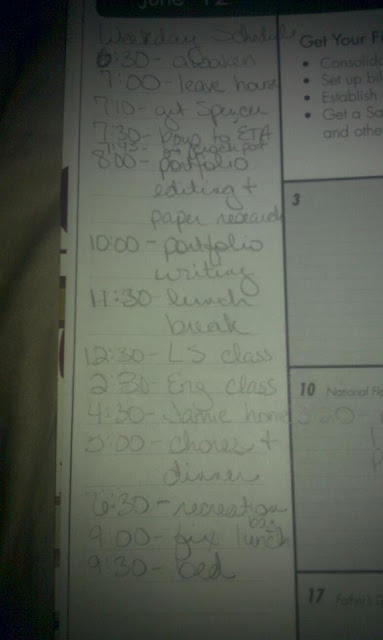 Jamie is gone during the day taking one of his high school courses (!!!!) over the summer so that he has more room in his schedule. He and several of his friends got accepted to a magnet program that focuses on Engineering and Technology. He's more interested in the technology part. Anyway, in this program, they have several required courses on top of the courses needed to graduate, plus they have to take extra math and science classes so that they the Distinguished diploma. So, not enough class periods in the day to get all requirements. Hence, taking a class in the summer. Jamie may have to take other summer school classes in subsequent years, as well.

Speaking of Jamie, here are some gratuitous pics to show you how much he has grown. He is now my height and his feet are about three or four sizes bigger! 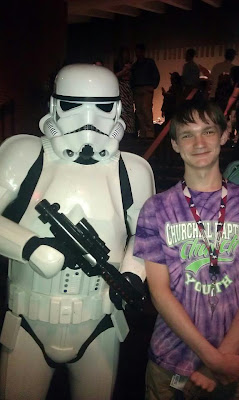 We went to the SA Symphony's concert of space-related themes. Of course, Star Wars was on the play list. Several people dressed up as Star Wars characters came out during the concert, then mingled with the audience afterward. 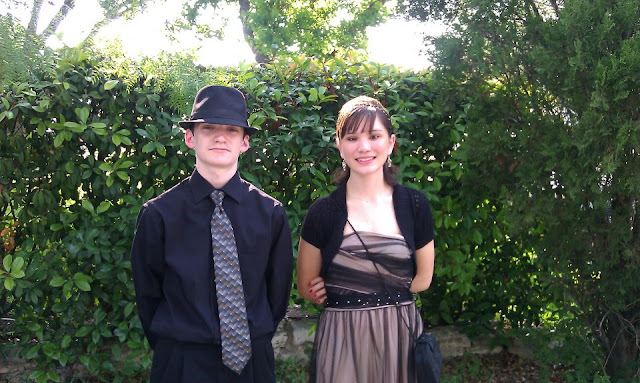 Jamie and his friend Caitlin before the 8th grade semi-formal dance. She is actually an inch shorter than he is, but had on kitten heels so they looked the same height. Sadly, Caitlin will be going to a different magnet high school next year, so we won't see her as often. :-( 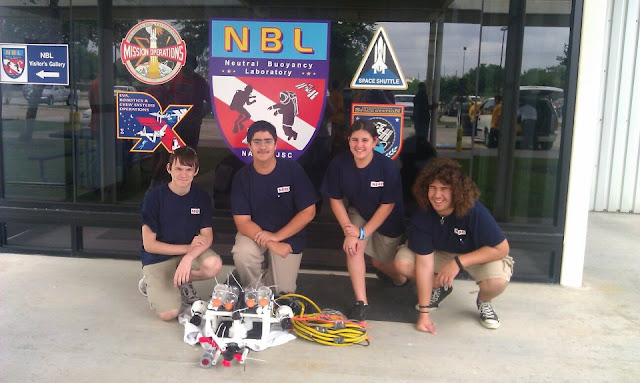 And last, but not least, Jamie and the rest of my NERDs (Neighborhood Electronic Robotic Device) at the Neutral Buoyancy Lab at NASA for the Remote Operated Vehicle (ROV) competition back in April. They were the only middle school team in attendance. Competing against high school and university teams, they got 6th place out of 14 teams. WAY TO GO, NERDS!!!!!!!