What Are You Doing New Year's Eve?

I've talked before on here about our good friends Jon, Julie and Spencer. Jon plays electric bass in a country/western band - Clint Taft and the Buck Wild Band. Sometimes, Spencer plays fiddle on some of their songs - mainly when the band is playing at a family-friendly place. Tonight, they are playing a New Year's Eve bash at Lubianski's Dance Hall & Feed Store in St. Hedwig, Tx. (Yes, Becca, I did say dance hall AND feed store. I guess it's a feed store in the front and a dance hall in the back. I asked if it was kind of like a mullet - you know, business up front and the party in the back... Yeah, yeah, I know, lame joke. But I still liked it!) Lubianski's has been a St. Hedwig, family-owned, family-friendly tradition since 1949. Another plus, it's smoke-free and kids under 12 get in free.

So, Jamie and I are going to go root for Spencer, have some fun, and have a good time with friends tonight. Oh, and our friend Michal (who also happens to be my boss' daughter) will be going with us, too. She loves country music, and she's a sweetheart (whom Jamie absolutely adores!), so we should have lots of fun while we're there. I doubt we'll stay until the ball drops and the doors close, but we'll have fun, anyway. Happy New Year, everyone!
Posted by Jenn-Jenn, the Mother Hen at 12/31/2009 3 comments:

Just a quick post to bring everyone up to date:

That's it for now, folks. I'm sure there's lots of things I should have told you, but I don't remember them now. Hope everyone has a very merry Christmas!

Come One, Come All! 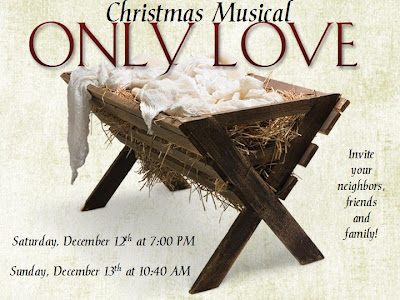 Well, those of you who live in and around San Antonio, anyway.
Please join the Churchill Baptist Choir on Saturday, Dec. 12, at 7 p.m. for the presentation of our Christmas musical, "Only Love." We will be repeating our performance on Sunday, Dec. 13, at 10:40 a.m. at the church.
For those of you who have been wondering where I've been and why I haven't been blogging, my brain cells have been occupied with school (exams and finals are fast approaching), work, and music. See, I'm singing a solo, and I'm a wee bit nervous about it (as in, somebody get me some Xanax, fast!) Jamie is also singing with the children's choir in one of the songs.
So, don't expect to see anything from me for the next two weeks. This week I'm all about the musical, and next week, I'm all about finishing up school. As in - DONE! Getting my degree! WOOT!
Posted by Jenn-Jenn, the Mother Hen at 12/07/2009 5 comments: