I didn't really have the money to do it, but I did it anyway. My birthday is in about 3 weeks. My dad made me promise I would buy myself something completely impractical that I really really want for my birthday (he deducted a hefty amount from the big chunk of cash I owe him). Today, I was checking my e-mail and saw that the Houston Dynamo MLS (Major League Soccer) team has a home game on Oct. 18. That's the Saturday before my birthday. Then I noticed they're playing the L.A. Galaxy, the team that Mr. Hunky-and-Oh-So-Adorable-and-a-Really-Good-Soccer-Player-to-Boot David Beckham is on. So I decided my birthday present to myself is taking Jamie to see an MLS soccer game in a big huge stadium. Jamie has been bugging me to take him to see the Houston Dynamo ever since they played in an exhibition tournament here in San Antonio, and he managed to meet several of the players and get their autographs. Just about every week, he'd ask if we'd be able to drive to Houston for a game. I had to keep telling him no.

So today, when I picked him up from school, I casually mentioned that I had a secret.... and said nothing else. The. Whole. Way. Home. By this time, Jamie was squirming in his seat, just dying to know what I knew that he didn't know. Then I just casually mentioned he was taking me to see the Houston Dynamo for my birthday.... He whooped and jumped up and down. Then I mentioned who they were playing and who is on that team. The child SCREAMED like someone had just killed him.

I think Mommy earned some major cool points today. What do you think?
Posted by Jenn-Jenn, the Mother Hen at 9/30/2008 1 comment:

No, That Isn't a Cat Screeching, It's Jamie Practicing Violin

I was able to find a reputable music shop that rents violins (and 100% of the rental price goes towards the purchase of a violin), so on Friday, Jamie and I went down and got him a violin. Despite the fact that he has not had a single lesson, he insisted on trying it out. Now, I kept trying to tell him he needs to wait until he actually has some lessons before he starts playing because he doesn't want to develop any bad habits or accidentally damage the violin or bow.... to no avail. He's so excited about this that he insisted on digging out the DVD and CD that came with his lesson book and dove right in. The dog ran from the room and hid in his crate; the neighbor's cat that is always in our yard started yowling; and Jamie sawed away with a huge grin on his face. I finally convinced him to put it away, his first lesson was only a few days away, he could wait that long without dying, etc. etc. etc.

I now feel sympathy for what my mother went through when I first started learning the flute at my older sister's knee. Please, let us all pray he improves with practice! LOL
Posted by Jenn-Jenn, the Mother Hen at 9/29/2008 1 comment:

An Improvement (of Sorts)

I called the special education specialist at Jamie's school today. Now, Jamie does not fully qualify for special ed services, however there is some crossover with special ed on what Jamie needs to be academically successful (this is where the whole "fish tank" thing comes in). Anyway, Mrs. G. told me she had already conferenced with Jamie's teacher, who had sought her out because of my insistence that Jamie is supposed to be allowed to go to the fish tank, even though his teacher couldn't find it. Apparently, the school was a wee bit lax this year in putting out the lists of students who are allowed (i.e., required) to go to the fish tank for tests. The stipulation that Jamie is allowed to go to the fish tank is in teeny, tiny little letters on his IEP, in an apparently out-of-the-way place on the forms, buried down deep where his regular teacher never saw it. Since she couldn't find it in his IEP, and didn't see his name on a list of students allowed to go, she assumed he was not supposed to go. For that, I will forgive her (a little. Although, if I had a student who was a good kid, didn't cause trouble, and was obviously ADHD, and both he and his mother repeatedly insisted the kid was supposed to have been allowed to go, I think I would have investigated it before now instead of insisting over and over again that he wasn't. Then again, I'm not a teacher who has to deal with 21 rowdy 5th graders all day everyday, so maybe I wouldn't).

Anyhoo, it seems the fish tank battle is over... Now, let's see what we can do to get the nurse's office situation cleared up!

On an unrelated note, anyone know where I can get Jamie a 3/4 sized violin in good repair at a not hugely expensive price? Jamie wants to join the orchestra at his school, but I don't have the $$ available to buy him a new violin. Anyone have any suggestions?

I am very angry at Jamie's new teacher. Even though it is documented in his school file that he gets migraines and has a note from his neurologist stating that Jamie must be allowed to go to the nurse at the first sign of a headache so he can take his medicine and wait in a quiet, dark place for it to take effect, she wouldn't let him go when he told her he had a headache. This has happened more than once, which then resulted in me having to go pick him up early because he wound up with migraines so bad he was crying. Then she had the gall to send a note home that she felt Jamie was missing too much classroom time by going to the nurse's office. I fired one back stating that - considering his asthma, G.I. problems, migraines and allergies - he'll probably be spending a lot of time there, just like in previous years, and so long as his grades weren't affected (which they aren't), I didn't feel it was a problem to let him do what the doctors have stated he needs to do. She didn't like my reply at all.

Not only that, but it is also documented in Jamie's file about his ADHD, and that he must be allowed to take tests in what they call "The Fish Tank". Basically, it's just a quiet room where there are no distractions. The class had to take a test one day when there was a substitute (which of course means the class was more rowdy than usual). So Jamie asked if he could go to the Fish Tank to take the test, and the sub showed Jamie a note his teacher had left stating Jamie was not to be allowed to go to the Fish Tank.

Furthermore, Jamie has reported to me that she is often very derisive towards and dismissive of him in class, especially when he asks a question about classwork, can't get one particular student in his class to leave him alone, or needs to go to the nurse. Jamie has never had a major problem with any of his teachers in the past. Sure, there was one who didn't seem to "get" Jamie at first back in third grade, but by this point in the school year they were good buddies.

I've sent notes to school explaining about his migraines, reminding her to look at his Educational Plan on file in his records about his ADHD, telling her to look in his file at his notes from the G.I. doctor, the neurologist, the psychiatrist, etc., and to please follow their instructions, to no avail. I'm supposed to have a conference with her sometime soon, and I will definitely address these issues. If that doesn't help, my next step is to go to the principal. If need be, I'll demand that he switch classrooms. But, geez, Louise, this woman is pissing me off!
Posted by Jenn-Jenn, the Mother Hen at 9/23/2008 5 comments:

“ Palin scares the crap out of me because her platform requires no real thinking either, and plenty of blind obedience. Gays are deviant. Books are dangerous. Abortion is murder. Evolution is wrong. War is right. And all it takes to win with a platform like that is charisma." debauchette qtd. on Electronic Pastures 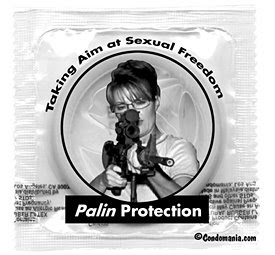 I also found this little gem there. Lurve it!