Continuing on in the theme of comic book superheroes, I took this test. Thanks, Ann, for cluing us all into this nifty webpage!

So, I was going to do this Blogthing on Everett's Blog (that he picked up from Ann's Blog) but then, I found this one: What Superhero are You? I'm Spiderman (er... woman). Who are you? If you read my blog, I wanna see what superhero you are!

Winter is over, spring has sprung
Now's the time for my nose to run.
Birds are singing. Feel the breeze.
Pardon me, I have to sneeze.

Yes, folks, winter seems to be over in San Antonio. For the past several days, the sun has been shining, the temperatures have been in the high 70s and low 80s and birds have been out doing their birdly things. I'm enjoying the weather change, other than my allergies being on overdrive. Seems like I sneeze 500 times a day and my nose is raw from having to blow it so much. I think the allergy issues are because it rained a lot about a week and a half ago, and it increased the mold and mildew count to astronomical levels. Once the sun shines a few more days and finishes drying stuff out, my allergies should be back under control. Of course, it makes it hard to believe that just last month they cancelled two days of school because of ice all over the roads.

Other than that, not much is going on. Just trucking along with my school work, job and Jamie's soccer. We've started to do some spring cleaning, too. We've only been here at the house a month, but we're going ahead and doing it anyway so it won't be such a chore later after we've cluttered up the house for months.

Mamas, Don't Let Your Babies Grow Up to be Cowboys... 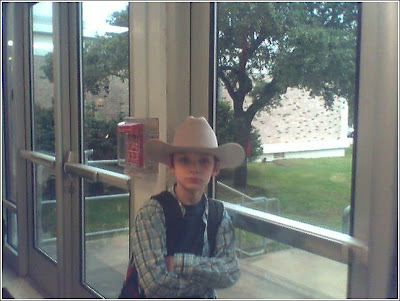 When a Fatal Peanut Allergy is a Good Thing

One good thing about my kid having a fatal peanut and tree nut allergy is that we don't have to worry about this recall. And, thankfully, the parents of Jamie's classmates actually paid attention to the teacher's note telling them what kind of candy to NOT send for the Valentine's Day party yesterday, so there were no mishaps involving accidental peanut/tree nut ingestion at school.

Just wanted to put up a quick post regarding Jamie's first soccer practice. He had a blast (of course), and is eager to do what he can to improve his skills.

Just today, I discovered that one of our technicians has played goalie in soccer for most of his life, and played all the way up to his first year of college. Now he plays in an indoor soccer league, and volunteers helping out younger kids with soccer. So, he has volunteered to come over once a week and give Jamie some intense one-on-one coaching in goalie skills. He even told me some things I can work with Jamie on until he can come over personally. Isn't that fantastic?

And on another note, Happy Valentine's Day to all my family - whether "adopted" or biological!
Posted by Jenn-Jenn, the Mother Hen at 2/14/2007 No comments:

I was notified by Jamie's coach the other day of several things. 1) Jamie is getting very good at soccer (well, duh!) 2) Jamie is the only returning player she has who knows how to play goalie effectively 3) With a bit more practice and dedication, he could become very very very good.

So, considering the fact that he's about to start his 7th soccer season, I didn't think he was going to quit anytime soon. In fact, he lives and breathes soccer. In light of all that his coach told me, and how much he loves the game, we went shopping last night.

I spent $200 on soccer equipment for this kid.

His feet have outgrown his soccer shoes, so he needed new ones. Did I mention the pair that fit him were young MEN'S size 5, which is about the equivalent of a ladies' size 7??!?!?!?!?!? He also needed a larger ball, as he's advanced one age group. He needed new shin guards, as his old ones were not long enough. I had to buy XSML ADULT guards to cover the kid's shins. He needed new shorts, as all his old soccer shorts made him look like he was wearing "hot pants". He needed new soccer socks, as his legs have gotten so long his old ones looked like anklets on him. Since he's going to be playing goalie for at least half of just about every game, he needed goalie gloves. Ditto that for needing a goalie jersey (it has padding so it won't hurt so bad when he gets nailed by the ball). Those are the items he needed.

There was one item on which I splurged. However, I think it will come in handy at home, not only for him, but to help me get back in shape, too. I bought him a 6.5' tall x 12' wide soccer goal for us to practice with at home. He has so much excess energy, and loves soccer so much, that I figure he and I can play together every day. This will accomplish several things 1) it will help him build up stamina and goalie skills, 2) it will give us some "mommy-son" time, 3) it will wear him out so he'll sleep good at night, and 4) it will help me get back in shape.

Now, I know I spent a ridiculous amount of money. But, like I said, he's already proven he loves the sport and will stick with it. I was able to buy some of the stuff big enough he can use it for several seasons. The goal will be able to be used for years. Plus, Jamie's at the point where you have to start working on training them, but still making sure they have fun. Based on what several people have told me, he's showing great potential and a real talent, which could lead to him playing on school teams, and even could provide scholarships into college. Now, I know college is a long ways away, but any scholarships he can get in addition to academic scholarships (which that kid better get!) will be much appreciated. I faint every time I see the projections for college tuition in 2016.

So, if you don't hear from me for a bit, you might want to e-mail me and make sure I didn't take one header too many from the soccer ball. That is, if I survive just putting the goal together.
Posted by Jenn-Jenn, the Mother Hen at 2/13/2007 4 comments:

...and anyone else looking for a good, imaginative read.

Becca and I were having a conversation last week about books. I started reeling off the names of books she might like, and the list had gotten so long she told me to e-mail them to her. This got me to thinking that there might be others of you out there looking for a good read and had never heard of these books. So, I present to you my list of books I strongly recommend.

Oh, and one thing to note about these books. Many of them are considered "Young Adult" or "Juvenile" Literature, but I greatly enjoy them because they are much smarter, sophisticated books than we had in high school and junior high. As Becca pointed out, "Yeah, just about all we had was Sweet Valley High". LOL!

Some of these are older books that, if you read them again as an adult, you get sooo much more out of them.

Enjoy! And please let me know what you think if you read any of the books I'm about to present.

Okay, this list ought to give you all some books to get started on, anyway. Once you finish these, let me know, and I'll be sure to make another list. Enjoy!

P.S. I didn't include the HP novels on here because it's pretty much a "given" that Harry Potter is on my list of must-reads!
Posted by Jenn-Jenn, the Mother Hen at 2/12/2007 9 comments:

But this time it isn't with school work. I FUBAR'ed big time at work, and this was just discovered today. I think I came very close to being fired today. And that stinks, people.

Apparently, I had way too many balls in the air while juggling tasks. Well, I must have dropped one of them and had it go splat! while I wasn't looking.

My company does all sorts of complicated testing for our clients. Many of our clients are law firms involved in product-malfunction cases (both defense and plaintiff) worth - in some cases - millions of dollars. Some of our testing is done by outside laboratories.

I sent a very important, irreplaceable sample to the wrong laboratory. I had too many tasks going at once, and when I got interrupted to do another task, I got my addresses mixed up. Like I said, I FUBAR'ed. If the sample had not been found and forwarded to the correct lab, I would now be out of a job. My boss was so mad he couldn't even speak to me. Well, actually, he yelled a lot, but when he tried to talk to me, he was so mad he started stuttering. That, folks, means he was severely P.O.'ed.

I have a feeling that I'll have some sort of disciplinary action taken against me. I wouldn't blame him. This was a serious snafu that could have caused us to lose our national reputation, millions of dollars in billings over the years, etc. I'll take any punishment they want to give (just please don't fire me.)

I am no longer going to bring homework to work with me. I am going to concentrate more on my work. I am definitely going to make sure this NEVER happens again! (And at night, I’ll concentrate harder on my homework so I can hurry up and complete my degree.)

Email ThisBlogThis!Share to TwitterShare to FacebookShare to Pinterest
Labels: work

I'm in trouble folks. See, I hate math. I hate math so much that I have a mental block about it. Can't even properly balance a checkbook (but I can balance the books at work just fine - imagine that). So, anyway, this person who hates math so much is taking an intermediate algebra course, because I didn't score high enough on the test to take a regular math course, which I wouldn't choose to take to begin with, but I have to as it's required for my program. Anyway, in this math course I'm currently taking, I have to take an exam. Today. But I don't really understand what I'm doing. So, please pray for me to gain enlightenment and understanding of math (well, of everything, actually) so that I don't make a big fat F on my exam today. I'm going to try to sneak some study time in today during work.

J.K. Rowling has announced July 21 as the publication date for "Harry Potter and the Deathly Hallows". Guess what I'll be doing at midnight the night before... Standing in line at Wal-Mart waiting for it to go on sale. At least I will only be taking one college course when it's released so I can stay up all night reading it.
Posted by Jenn-Jenn, the Mother Hen at 2/01/2007 6 comments: