MORE PICTURES! But these are all of Jamie! 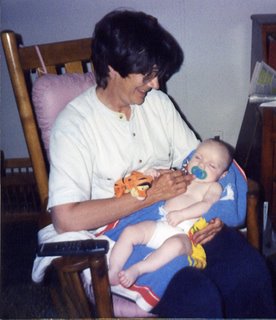 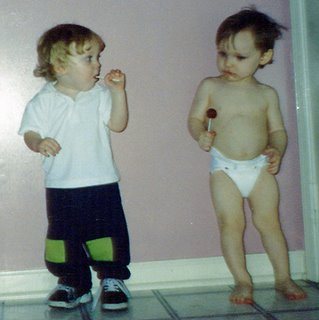 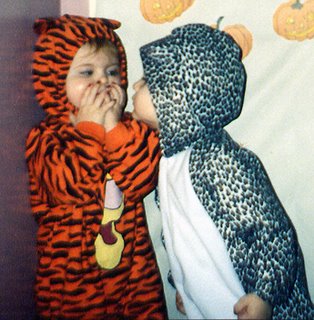 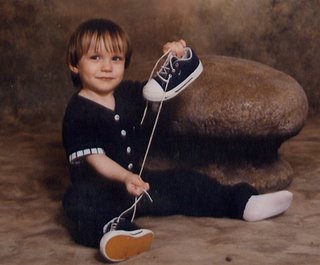 Yes, these pictures are all old, but I just found them in a box last night. The first one is one of my favorites, because Mom is in it. Jamie was "her baby", through and through. In this picture, he was sick with a really high fever, so we stripped him down so he could cool off. But he wanted cuddlin' and no-one could satisfy him but Grandmama!

The second one was when he was about C.J.s age. He had gotten sticky sucker spit all over his cute outfit, so the babysitter had to strip him down. That's his best buddy Noah with him (yes, they are still best-est buddies).

The third one was obviously Halloween. He and his little girl-friend both dressed up as types of kitties for Halloween (sorry I don't remember her name. She moved shortly after this picture was taken). He was trying to steal some sugars from her, but she wasn't having any of it! So I call this picture "Kitty Kisses".

And the last one is another of my absolute favorites. He's still pretty young in this one - like a little over two. The photographer was great, because she just let him plop down and do what he naturally wanted to do instead of trying to pose him. So Jamie untied his shoe and took it off - then held it up to show me (with a very "Dennis the Menace" grin on his face). He had just recently figured out how to do this. There's another picture (which I haven't found yet) that she took when he was trying to put the shoe back on - too bad he's trying to put it on the foot still encased in a shoe! He has such a serious look of concentration on his face, too. As soon as I find it, I'll post it!

who's with me, i think we should have a caption contest for these pictures. any suggestions? I think that second picture definitely needs one.

LOL! Yeah, Noah looks like he would have said (if he could have talked clearly) "Dude! This isn't a nudist camp!"

Do we get to vote on which is our favorite picture? I vote for Kitty Kisses, I think, but I like them all. You have a darling little boy. love you both.

I have to admit, in the one where he's taking his shoe off, the first thing I thought was, "Bih doe!"

Thank you, Tooz. I happen to think he's adorable myself!

Yep, Beck, I thought of your little one when I got out the last picture. "Bih Doe!" indeed!

Picture number two made me think something like this:

Jamie: "Yeah, man, when I woke up, all my clothes were gone, man. Rough night."

and maybe for the kitties picture,

Jamie: i'm a good kisser. i give my mommy kisses all the time

Girl: Get back, alley cat. Your breath smells like animal crackers.

LOL! Those are great captions, Ann!

I have more pictures which I will periodically post. There's one I may do soon comparing Jamie's facial features with that of various members of my family - myself included. There's one that I find totally hilarious of my dad holding Jamie when he's still a little-bitty baby. Jamie is smiling toward the camera, and my dad is smiling to someone off-camera (my mom). But they look exactly the same! (Jamie grew out of that stage, though!)

OK, since Ann asked in another comment, here's my suggestion for the second picture:

Jamie: Is that a booger in your nose?

Girl: Oh! How could you say that? But is there really one in there?

How's that one, Ann?

LOL! You girls are punny!