Oooooooo! Sparkly.... and Patriotic, too! 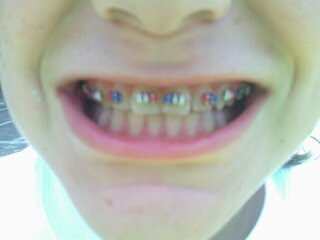 Went back to the orthodontist's office yesterday because *A* bracket popped off in the night. Come to find out, THREE brackets popped off! Jabberjaws here couldn't shut up and be still on Monday when they put them on, so he got the bonding stuff wet with his spit. When it gets wet, it doesn't bond. So, they had to take all the wires and elastics off, and redo the brackets, then put the wire and elastics back on. In a fit of patriotism, Jamie decided he just "had" to switch his previously much admired combo of sky blue and metallic ocean blue for red, white and blue in honor of Independence Day.

Yesterday, Jamie did much better at sitting still and not talking while they put the braces back on. In fact, he actually managed to fall asleep while they were rebonding the brackets! I think he was just exhausted from not being able to sleep the night before because of the pain in his mouth. Due to how much pain Jamie was in, they left off the itty-bitty wires that go around the brackets and force the teeth to move more quickly. Using just the big wires and elastics will get the job done, albeit more slowly. Due to Jamie's pain levels, though, I'm willing to take a slightly slower approach. They are going to check his pain tolerance next month when they put on the bottom ones.

Here are more goofy pictures for your viewing pleasure. 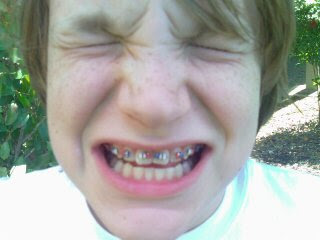 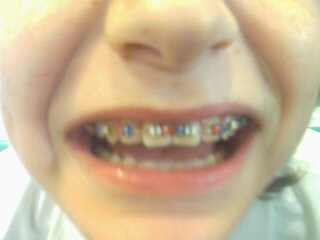 Email ThisBlogThis!Share to TwitterShare to FacebookShare to Pinterest
Labels: Jamie

I don't mean to be rude, but looking at his bottom teeth--why is he getting braces? His teeth already look straight to me.

I was going to type a big long explanation, but instead I'll turn it into another blog post instead. Good question, though!