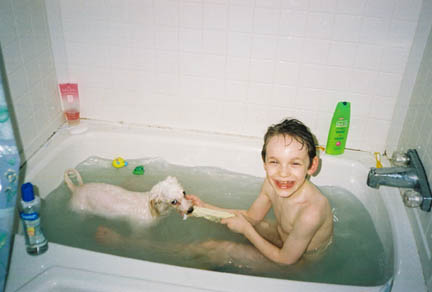 I haven't talked much about my dog, Zig Zag Scalawag (a.k.a Ziggy). He's an AKC registered Bichon Frise, but when people ask me what kind of dog I have, I usually reply "a spoiled one". When Ziggy hears water running in the bath tub, he goes charging in and tries to get in it. However, if you actually start to wash him, he doesn't like it and will jump out of the bathtub. But the minute you stop trying to put shampoo on him, he'll jump in again.

His favorite thing to do is jump in the bathtub when Jamie is in there taking a bath. He'll then try to take the wash cloth away from Jamie (see picture). He's very sneaky about getting in there, too. I'll turn one way to try to grab him and get him out of the bathroom, and he'll duck around me behind my back and jump in the water anyway.

He also loves to sleep in the bed with his people. He'll snuggle down under the covers, lay on his back, and hook his paws up over the edge of the blanket! If you try to move him, he'll get up, scooch over and lay down with his butt in your face as punishment!

One thing that annoys me down here though is the fact that no one seems to know what kind of dog he is. I keep looking for one of those doggy shirts that says "I am NOT a poodle!" I haven't found one yet, though. Maybe I'll send my friend Suze some money and ask her to knit him one. I'm not very talented when it comes to sewing or knitting. In fact, my Granny once tried to teach me, but gave up when I managed to tangle up a whole skein of yarn within about 10 seconds.

Have to go put Jamie in the bathtub now, and lock the dog out so I don't have to give him a bath, too!

BTW - the little picture is of Ziggy when we first got him. He's bigger now. I'll post some new pictures once I finally get my film developed. I've only been carrying some of it around for a year now!
Posted by Jenn-Jenn, the Mother Hen at 5/27/2006

are you sure you want a knitted item for a dog that lives in san antonio? still, i would do it, i really would!

bichon frise is the only kind of dog, i like. not too licky, and not too yippy.

I think a baby t-shirt would be perfect for your crazy puppy. You could have it screen-printed on there. However, if you choose to go with the knitted shirt, Mom could crochet a matching hat to go with it--ya know, a flower, or strawberry or ice cream cone. Did you see all the ones she made for her soon-to-be-born granddaughter?
Loco mama!

No, I didn't get to see those, Lydia. They sound really cute, though. You could use the strawberry one to dress her up for her first halloween. Dress her all in pink and put the hat on her and Voila, she's a strawberry!

Suze,
when Ziggy gets shaved down for the summer, the first couple of days he shivers because he isn't used to have air on his skin. And there are about two weeks in the winter time that are kind of cold.

Ziggy hardly ever barks, which I really like. He only barks if you're playing with him or someone knocks on the door. Other than that, he's perfected that whole "cat stare" thing. Whenever he wants something, he'll jump up in your lap and get nose to nose with you and just stare.... and stare.... and stare. Then he'll either go to the door and stare at you some more (to show he wants to go out) or he'll get one of his toys and bring it up into your lap. At which time he will THWACK! you in the head with it. He's a very silly, strange dog. He fits into my family perfectly!