On Saturday, Jamie's soccer team tied 4-4 with their opponents. It was a thrilling, close game all the way up to the final whistle. Jamie did several body-blocks of shots, which made him the center of attention and earned him much praise from both his coach and his trainer. Of course, this had Jamie soaring on cloud nine. He likes it when Mom praises him, but it means so much more to him to have a male figure pay attention to him and praise him. And of course this wrenches my heart when I see it happening. I'll never be able to do or say anything to make it up to him that he doesn't have a dad. I can try to be both Mom and Dad until I'm run ragged and exhausted, but I will never be as good as him actually having a father. It breaks my heart each time I see it, and realize that there are some things I just can't do for him.

Anyway, back to the game Saturday. I didn"t get any really good shots as I was too busy screaming my lungs out. Sorry!

Saturday night, Jamie spent the night with his friend Remo to give me a chance to catch up on a paper that's due soon. They went to Baskin Robbins, played in the super-cool treehouse, and stayed up much of the night talking and playing video games (despite the fact that I told Jamie to be in bed by 10 p.m. Oh well, what can you do?)

I picked Jamie up this morning at 10 a.m., took him home, got him breakfast and changed into his soccer uniform, then we headed up the Interstate for his game today. Unfortunately, they got creamed. Beaten badly 1-7. All the kids just seemed pooped out today. Maybe they weren't used to Sunday games. Maybe they were still tired from the day before. Or maybe, like Jamie, many of them spent the night at friends' houses and stayed up way too late and ate too much sugar. Who knows. At least it was a learning experience for them. I've included a few pictures from the game, but nothing spectacular. I was too busy screaming again. I did want to show you guys how beautiful it was today, though. That super blue sky and all the clouds! 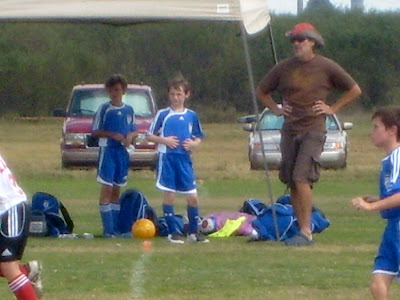 This is Jamie and a team-mate sitting on the sidelines with the coach. Jamie's holding his stomach; could it be he ate too much Baskin Robbins the night before? 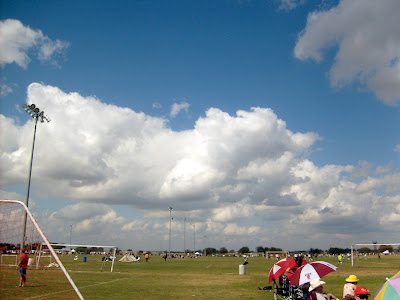 See the gorgeous sky? Do you notice all the umbrellas? Texas is the only place I've ever been that they use umbrellas when the sun is shining but run out bareheaded into the rain.

Tonight, Rachel's new boyfriend Will surprised the kids by buying them pumpkins then helping them carve them. This was the first time Jamie had ever carved a pumpkin. Always in the past we just painted faces on them. So getting to make an honest-to-goodness Jack O'Lantern was a blast for him! Here's some pics... 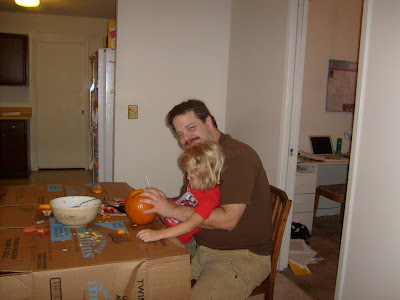 Here's Will "helping" Destiny carve her pumpkin. She was a bit cranky tonight and did NOT want her picture taken. 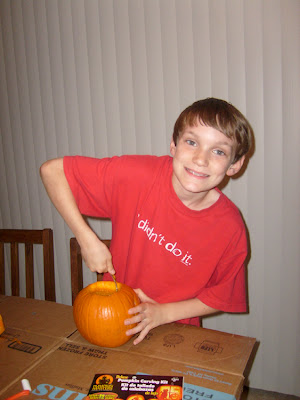 Here's Jamie happily scooping the guts out of his pumpkin! 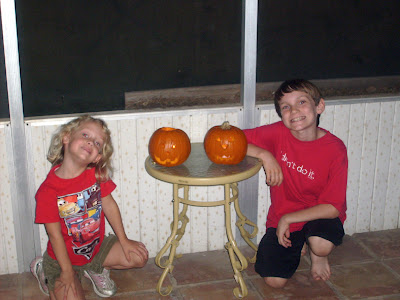 Here they both are with their finished product. In typical 3 year-old fashion, Destiny decided it was perfectly grand to have her picture taken this time. They both are excited because they have been promised by Will a chance to carve even bigger pumpkins they get to pick out of a pumpkin patch themselves.

Now that I'm done bragging about my kid, I guess I'll go to bed. Good night, all!

wow, jenn, what a kid to brag about! love the pictures. you have so much to be proud of (and i'm not just talking about your son, but about yourself, too!!)

What a great weekend for Jamie! He looks pretty darned proud of that pumpkin--maybe it made up for the last game. Love you all.