According to Blogger, this is my 400th post! Woot! Can't believe it! Although, content importance wise, this is probably only about my 100th post. I'm not the most relevant writer to the world - most of my writing has to do with me and mine, rather than the state of affairs in the world or rants about the frickin' media being so yakity-yak about Michelle Obama's fashion sense, but practically ignore the fact that she's one smart cookie and has made many decisions and changes at the White House that are soooooo relevant to the financial mess we're in right now (my favorite: the White House vegetable garden)! But don't get me started on that. I'll blow a gasket. I have to turn off the stupid news anytime someone starts gushing about her clothes and acts like that's all there is to her.....ARRRGGGGGGGGHHHHHHH! Now I'm all batty thinking about it. I'll just stop now.

The rest of this post will be dedicated to the bedrooms of the new house, and the heart attack I had over the weekend regarding the price of paint. Ai yi yi! Yes, the landlord is going to reimburse me, but DAMN paint is expensive! I'm looking at about a $200-$300 investment, and that's just for the low end stuff. But paint is a necessity. This house is ugly, and I will go batshit insane (to steal a phrase from Suze) if I have to sit in my living room and stare at shit-brown walls. (Upon close inspection of the walls over the weekend, I've decided they aren't pretty enough to be chocolate brown. Instead, it looks like shiny poo has been smeared all over the place. I refuse to sit and look at poo all day!) So, since the investment is more than I thought it would be, instead I'm painting the whole house one color and all the trim a bright white, then as I have money I'll add the accent walls in one room at a time. It won't be as pretty in the meantime, but I'll be there two years. I think I'll live. Besides, even the one color I choose to paint it will be soooo much better than poo. I don't like feeling like I'm sitting on the inside of a dirty diaper.

Anyhoo, here's pics of the smallest bedroom, which will act as our office/music room/playroom/guest room, as the need arises. Normally, I would like this pretty shade of yellow; however, it is too yellow for the tone of the rest of the house, so it will be painted over, as well. 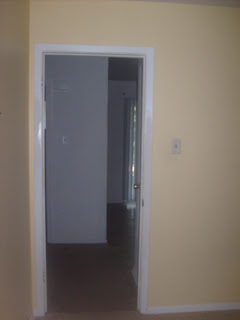 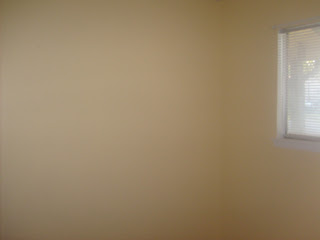 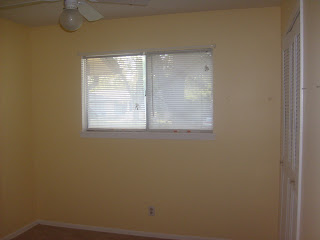 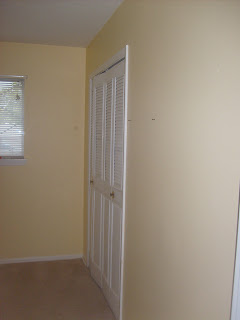 I have one minor note. If the walls are shiny and you're going to be painting them less shiny, use primer first. Less shiny won't stick well to shiny. Jim's a painter in the summer.

I think the investment will definitely be worth it to be rid of poo-colored walls. ugh!

And I totally agree about Michelle Obama. The last first lady was so vapid I guess the media doesn't know how to handle a woman with so much going on!

Yeah, we second Jim and Tara's comment. Geron asked me if you were planning to use primer. GOOD PLAN.

Your description of the wall color you hate is hilarious. What color did you decide to go with instead of poo?

It's a color called "Natural Wicker," which is a light beigey-tan by Glidden paint company. I was going to use Sherwin Williams' "Canvas Tan," but it is waaaay too expensive. "NW" is the exact same color as "CT", but costs $100 less for a 5 gallon bucket. Glidden's primer is 1/4 the price of Sherwin Williams', too.

I've used Glidden before and was very happy with it. Good choice.