Woo hoooo! Jamie's soccer team, the Dragons, won their first game of the season! Yayyyyyyy! It was one of those really tense, exciting, never-know-which-way-the-score-is-going-to-go kind of games. Jamie's team scored the winning goal in the last minute of the game. And they were playing against kids who were older and bigger, to boot!

Jamie played goalie the first half, and was a striker (forward) in the second half. He didn't score a goal personally, but he was very good about being there for the others to help them out with passing and such.

The team has come a long way in just three games! They were actually playing as a team the majority of the game, looking to see who was open, passing the ball, spreading out, all that good stuff that makes the game exciting. And it was incredible seeing them finally "getting" what their coach has tried to teach them all along.

I was so excited and yelled so much that I fear my voice has suffered a set-back. I guess I'll have this odd, husky-yet-scratchy voice for a bit longer. I guess it's worth it, though. :-)


Oh, and here's some eye candy for you: 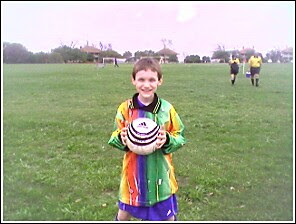 I can't believe I actually got a *real* smile out of him for this one. Of course, for the next one, he had to goof off: 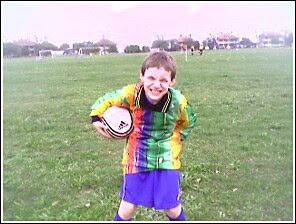 And in case you were wondering, the Dragons lost their first game, tied their second game, and now have won their third game. I can't wait to see what happens next weekend!
Posted by Jenn-Jenn, the Mother Hen at 3/24/2007

Email ThisBlogThis!Share to TwitterShare to FacebookShare to Pinterest
Labels: soccer

I love that jersey! It's awesome.

That's one of the special goalie shirts I bought him when I found out he'd be playing goalie a lot this year. I'll try to get pictures at the next game of the other one, too. It's an electric green on a black background.

I, too, like that rainbow shirt! And I like both smiles, both the real one and the goofy one. Of course that's because I like the boy!

He isn't so fond of the rainbow shirt because he thinks it's too "girly". He had no choice for this game, though, as the other shirt was still stinky from last week's game. I'm so far behind on laundry, it'll take me two weeks of solid washing to get it all done!