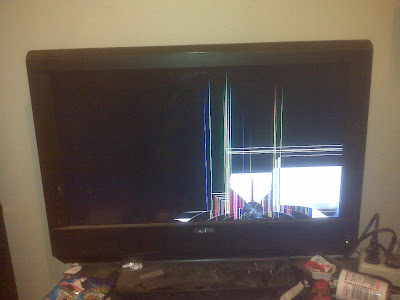 This is what my TV looks like after Jamie decided to play balloon baseball in the house yesterday. He was using the long vacuum cleaner attachment as a bat. His hands sweat a lot. Plastic is slippery when sweaty hands hold it. Plastic vacuum cleaner attachments don't have enough heft to break through the TV screen, but they have enough to destroy the LCD display. So, when we watch TV, we can only see through the left side of the screen. I did not kill Jamie, because he felt bad enough about it already. But he is being punished. I took away his computer privileges, his Nintendo DS, and the money I was going to pay him for cleaning the house all summer. He also has had extra chores added. This goes toward the cost of replacing the TV.

Oh, and don't tell him I said this, but I'm finding this a little amusing today. And actually, this gives me an excuse to buy the Internet-ready TV I was wanting to put in the living room anyway (so I can stream Netflix into the living room, too, and in HD, to boot). I would have had to buy a Roku HD player to do that. And for the record, I did call to see if it would be possible to repair the screen of the current TV, only to be told that the screens now cost more than it would to just buy a new TV. I also called my insurance company, only to be told that the loss isn't covered by my current policy.

I think another thing contributing to my having gotten over my anger so quickly is the fact that this TV cost me nothing. It was Dad's. He bought it a couple of months before he got sick and went into the hospital. I brought it home with me when it became obvious that Dad would never get to leave the hospital alive. I felt it was better to bring the TV home than to have it be a temptation for someone to break in and steal it. Also, this wasn't one of the best quality TVs in the world, and I was already thinking of how to replace it (with an aforementioned Internet-ready TV), so really, Jamie just expedited what I was already planning on doing. Although I was going to wait until Christmas time to buy us a family present, this just means I'm doing it now, and that that is one less present we'll have at Christmas.

Although, if I do go ahead and buy a new TV, I'll stick this one in the closet of the study, in case replacement screen prices come down later. This TV is also usable as a PC monitor, so I would like to be able to put this in the study to use on the computer and for guests to use to watch TV (if we ever have any overnight guests). And if that new TV does appear, I think I'll buy a wall mount for it, as well. I'm thinking it would be smart if I have the TV up out of the path of danger. After all, those vacuum cleaner attachments make for a wicked bat, and Jamie's remorse will only last so long.

Shop around, but it might be cheaper to buy a TV that is not internet enabled and purchase a cheap Blu-Ray player that will allow you to stream Netflix. I haven't priced it out recently but I am guessing this might still be the case.

I bought our Blu-Ray player in January for the sole purpose of streaming Netflix (we just watched our first Blu-Ray movie last week) and it was on sale for $100.00.

How well I remember cracking the heavy, beveled glass in the antique front door of our house when I was 9. Oh. Mah gawd! Nothing - NOTHING! - my mother could have done as punishment could have equalled the terror I felt when I slammed that door and hear the sickening *CRACK!* of that huge oval of glass. And, although Wednesday's "Funeral Invitation" was humorous, it really does sound like you've handled this well.