An Evening with (Jamie's) Strings

Not only have I been a bad blogger, leaving a morose snippet on my blog for way too long, I've been a bad mom, too, in that it took me nearly a week to upload and edit Jamie's strings concert from last week. Each spring, the school district hosts a district-wide "Evening with Strings" concert. The strings programs in the district are so plentiful they had to divide the event up into three different nights! The announcer said that Jamie's night, being the first night, was slightly smaller than the other two nights. At only 900 students that night, I can only imagine how many students played on each of the subsequent nights!

This year's theme was "A Little Rock n' Roll". Each school played an arrangement of a rock song. Jamie's school played "This Love" by Maroon 5. Now, I'm going to let my momma-pride kick in and say I think Jamie's school did the best. But, I will add that I heard several other parents from other schools who thought so, too. Good job, Krueger Orchestra!

There were 5th grade strings programs from 15 elementary schools, four middle school orchestras, and two high school orchestras represented. At the end of the night, they all joined together to play "We are the Champions" by Queen. It was, in a word, AWESOME!

Sorry it took me so long to get it up on here, and hope you enjoyed it as much as I did!

Here's photos of after the concert, also. 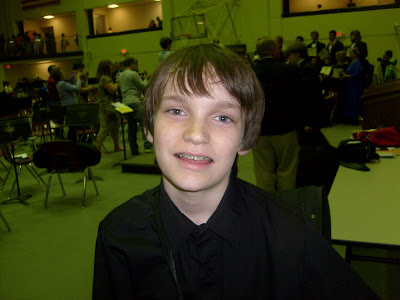 Jamie right after the concert. Looks like he's worn out, doesn't he? He confessed that during the high school orchestra's 15 minute montage of Beatles songs, he fell asleep! 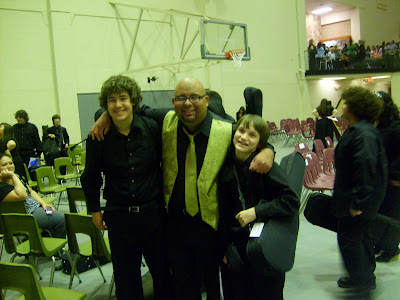 Spencer, Mr. Prado, and Jamie right after the concert. I think they're all glad it's over with!

Woah--the dude in the background in the last pic makes Spencer look clean cut. The last picture is my favorite.