Today, my baby is going to his first middle school dance. He has assured me that he has several girls in mind he wants to dance with. This blatant confirmation that he isn't a baby anymore and is *gasp!* growing up makes me feel like my head is going to implode. He isn't supposed to look at girls yet. Girls are still icky, aren't they? He isn't supposed to get all moony-eyed when talking about that one particular girl who sits three rows across from him in 7th period, is he? Since when is a girlfriend a requirement for coolness instead of a cause for ridicule from his friends? Aaack! I can't think about this anymore! Time to change the subject!
After the dance that I don't want to think about anymore, Jamie is going to middle school madness at church. He will eat pizza, watch movies, play video games, and goof off to his heart's content while I have some much needed alone time. My big plans? Grocery shopping, and picking up a few things I ordered for Jamie. See, I'm tired of fighting him for the computer. His magnet program requires him to spend a lot of time doing assignments on the computer - making movies, taking digital photographs and editing them, he even gets to learn how to write iPhone apps (next year), design web pages and create computer animation shorts. Now, some of the stuff he can do on the iBook laptop Joel gave me a few years ago for my birthday. But a lot of the other stuff he can't because his school uses Windows-based programs (kind of stupid of them, but whatever). That's when we wind up fighting over the big computer. So, after I got my tax refund and paid off the credit card, a small student loan, paid off the rest of my car insurance premiums for the rest of the year and paid a crap-load of other bills, I ordered him this: 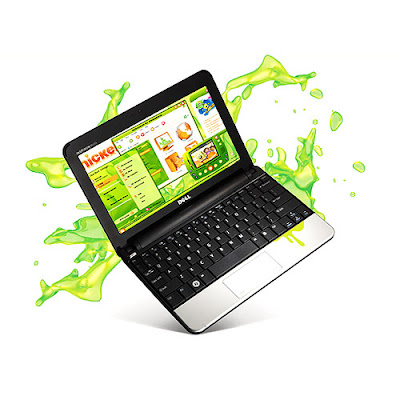 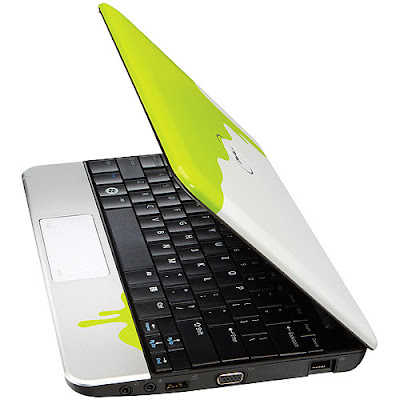 It's the Dell Slimed/Nickelodeon edition inspiron mini (photo source: Dell stock photos). It comes preloaded with a bunch of Nickelodeon content, as well as a lot of the programs he uses for school. It also has a built-in media card reader and - get this - a SPILL PROOF KEYBOARD! That was the major selling point for me. Jamie is a klutz like his momma. Spills are a frequent occurrence at our house. I figured if he was going to have a computer of his own, it might as well be one that can resist spillage. I've read many reviews that this computer is good for kids - has more memory and functionality than most netbooks, the kiddie-content can be removed as he gets older, and it's a small size that doesn't take up much room. Many of the reviews I read were from college students who bought it to take to class! So, while Jamie is at Middle School Madness, I'll be setting up the parental controls on the computer and playing with it testing it out.

Now, for you computer people out there - I know a Mac would have been better. But, quite frankly, I didn't want to spend a lot of money on his first computer that was his alone. Better that he trash a $300 computer (if he does trash it) than a $1,000 one, y'know what I mean? This is a good starter for him to be able to basic assignments in his room and I can have my computer back. After all, I (hopefully) will be starting grad school soon. I'll need access to my own computer.

Nifty!
Stuart runs Windows on our Mac through some kind of virtual program. I have no idea how complicated it is to set up, though...

Yeah, you have to have the current Mac software (I believe) that will let you install and run the Windows system (which is fairly pricey), then you have to have a more updated Mac than my iBook with higher processing speed to be able to run it. Both of which equals more $ than I'm able to spend. So, until I have a higher-paying position, I'll just have to settle for PCs. But once I can afford it, you bet your sweet biffy I'm getting Macs all the way around!

Right. Well, I kind of knew that. Plus, if you already have the new laptop for him, it's kind of irrelevant, isn't it?

I wish I were more tech-savvy, but my husband is such a whiz I just let him deal with it. I guess that's a fair trade-off since I do ALL the cooking and ALL the laundry and pretty much ALL the cleaning, right?