As much as I nag (yes, I used the "n" word) ya'll to post, I've been woefully lax myself. I was gently reminded of this via e-mail. However, I would like to plead my case as a busy mother before you.

I have been devoting a lot of time to my studies and my job this week. Added to that, yesterday, my friend R- came over and helped me get some order to this chaos that was my apartment. It was a HUGE task. She was here from noon until 11 p.m. And we still aren't done, but the apartment is at a place where I can handle it on my own now without being overwhelmed by the mere thought of what all had to be done. Let me put it to you this way, R- found so many dirty clothes that I have already done about 8 loads of laundry, and I know I have at least that many more loads yet to do!

Then today, Jamie had to get his promised reward. Jamie didn't get any pieces of his behaviour pyramid taken down for the whole MONTH of August (okay, so it was more like three weeks. You get the idea!) This was a massive accomplishment for him. So, as I had promised him, I took him to Build-A-Bear Workshop to make a small bear (short month = small bear. Next month is a longer month, which = bigger bear). So, Jamie had a blast picking out what bear he wanted to make, how much stuffing needed to be in it, what clothes to put on it, etc. He hasn't let go of the bear yet since he got it (even took it in the bathroom with him!) So, I would like to you all to meet Jamie's new best friend: 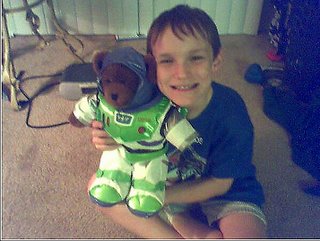 Jamie absolutely fell in love with the oufit from Toy Story. You know which space ranger this outfit represents. Jamie got to name his bear and print out a birth certificate. He couldn't think of a name for him, so I got to name him. He's called "Fuzz Lightyear." Pretty clever, even if I do say so myself!

Tomorrow is a day for more schoolwork and visiting Dad. Pretty much I'm taking my school books out there with me and locking myself in the bedroom with paper, pencils and books to read and take notes. Jamie and Dad will go out to the shed to do boy things or whatever.

My love to you all!

Good girl, Jenn! Glad you found time to blog and share with me. I have missed your emails and blog posts this week. Hope to hear more from you soon. Love you both.

Congratulations, Jamie! You are such a good mommy. I'm glad you notice when he's a good boy, and not just when he's a bad boy! (though I've never seen him be a bad boy, surely he must be sometimes) And that's a cute bear, with a cute name. I'm glad Jamie hasn't outgrown Toy Story yet. I know I haven't.

Heck, I haven't outgrown Toy Story yet! And I always try to point out when Jamie is a good boy as well as bad. I don't want him to feel like he's always wrong or bad, because that just leads to self-esteem issues (he has enough of those to begin with!)

I'll try to do better about blogging and e-mailing this week. However, soccer starts this week, so we'll see what happens!

Tell Jamie good luck this year with soccer--and that we love him, too.

Will do, and we love you, too!