Bringing You Up to Date

Wow, it's been way too long since my last post. How did four days get past me without me realizing how long it's been? A LOT has happened since then.

First of all, let me say that Jamie's soccer team won their second game! Jamie played goalie and did a fantastic job! Secondly, Jamie's coach awarded Jamie the "player of the game" medal for his defense skills and "assist" on the goal in the first game. All the kids get one for some reason or another throughout the season, but Jamie was very proud that he got it for the first game. Two other kids got medals for the first game, too. Coach White usually gives a medal for best defense, best offense, and best all-around for each game. They get actual soccer medals, and the kids are so proud and just light up when they get one!

Destiny got to witness her first soccer game this past Saturday. She stayed at our house from 6 p.m. Friday night until about 10 p.m. Saturday night. Rachel had to go from school straight to work on Friday and had to work until past 9 p.m. Then Rachel had school first thing Saturday morning then work right after that until after 9 p.m. again. So Destiny got to be my little adopted daughter. It was fun (but exhausting). She was especially excited that she got to wear Jamie's soccer jersey from last season to the game. It was so cute to hear her yelling "Go, Janie!" (she can't tell the difference yet between the "n" and "m" sounds) and "Go, Wizzawds!" She absolutely adores Jamie and runs after him like a little sister would. Jamie is at a stage where girls are kind of icky, so he treats Destiny like she really is his little sister. I spent a lot of time refereeing them, as Jamie was getting upset and yelling "Mom, she's touching my stuff!" It was actually pretty amusing. As you can see from the picture below, she's ecstatic over how she's dressed, and Jamie isn't amused at all! LOL! 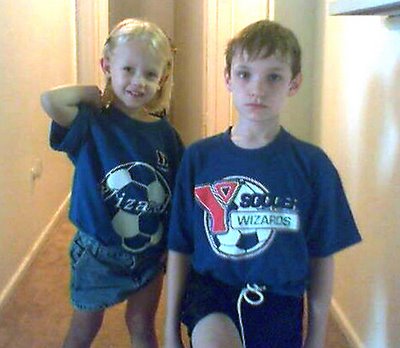 In other news, school is still truckin' right along, and the pace at work has let up some. I actually got to study for two hours at work on Friday, and should have some time again today. My one year anniversary at work is next week, so my boss' wife is taking me to lunch on Friday to celebrate, which is really nice. I'm supposed to have my end-of-year review sometime this week, and, recent fiascos aside, I'm fairly confident the overall tone will be positive.

Well, time to do my morning tasks, then do some studying. Hope you all have a great week!

I'm glad you had a good weekend. We did too. Love you all.

love the picture, jenn. glad things are coming along for you!