.. because I failed to tell you all that Jamie sprained his wrist last Monday while playing soccer at recess. The nurse thought it was broken, so I had to leave work and take him to the ER for x-rays. Turns out, it was just a sprain, but bad enough that he had to have a hard brace and no P.E. or recess (or soccer) for the rest of last week. I was told Jamie could play in the soccer game on Saturday, though, as long as he wore the brace.

Well, wouldn't you know that Jamie fell in the exact same way during the game and reinjured his wrist. Now it's another week of no soccer, recess or P.E., and the wrist looks worse this time around. I may have to take him back to his doctor if it doesn't get better soon. I'll keep you informed this time, I promise! 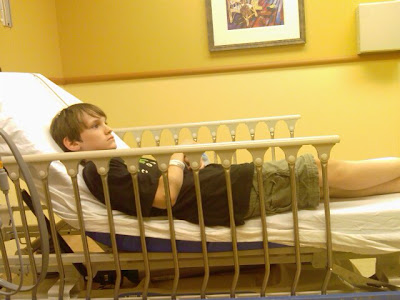 You can barely see it because one of the rungs is in the way, but Jamie has a huge ice-pack on his left wrist in this picture. This is what pain, boredom and the trance-like state that "Spongebob" induces looks like!
Posted by Jenn-Jenn, the Mother Hen at 11/11/2008

Email ThisBlogThis!Share to TwitterShare to FacebookShare to Pinterest
Labels: Jamie