They Won! They Won!

What an exciting soccer game today! Jamie's team played another team that is part of the same organization Jamie plays for. I think playing against a team they train with really fired the boys up! There were many tense, exciting moments, as the teams were pretty evenly matched, so they had to fight for every goal scored. Jamie's team won 3-2, but it was really close! Jamie played striker and goalkeeper (of course). He didn't make any goals as a striker, but he sure did block some amazing goals as keeper! I could really tell his goalkeeper training sessions on Fridays are starting to kick in. He was doing collapse dives, knee dives, chest catches and all kinds of stuff I don't even know the names of. He blocked at least 10 goals! He was amazing! Unfortunately, I was so keyed up and excited at the game that I forgot to take pictures of some of his most amazing saves. I promise to do better next weekend, though!

Anyway, here's a look at what pics I was able to take today... 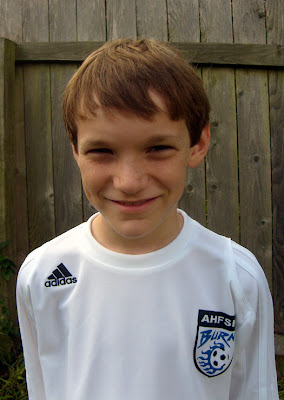 This is the picture I took and will submit for Jamie's soccer club badge. 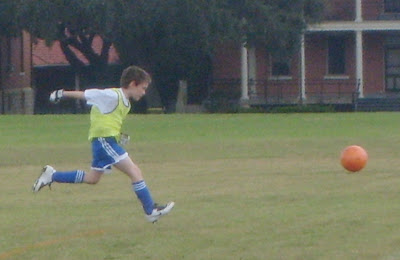 This is Jamie just after he nailed a ball on his goal-kick. (I was standing pretty far away when I took this one, so it's kind of grainy.) 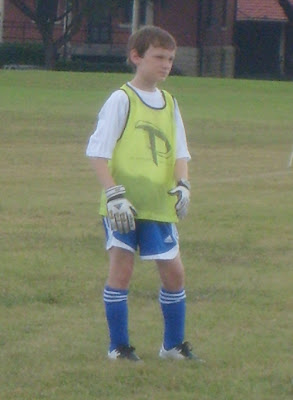 Here he is waiting for the ball to come back to his side of the field. I personally think he thinks he's "so tough" when he's got those goalkeeper gloves on! (Again, I was pretty far away, so it's a bit grainy.)

Random funny quote of the weekend:
On Friday, Jamie had goalkeeper practice. Everyone was being very sluggish and not wanting to do the exercises the trainer was showing them. When no one was able to complete the exercise (throw the ball straight up in the air, collapse to your knees, pop back up again in time to catch the ball), the trainer, Joe, yelled out - "Ah, I see you all have the reflexes of cats.... Dead ones!" Now, before you think he's being mean, I should say that it was not said in at all a derogatory manner, but jokingly. All the kids laughed. He doesn't insult the kids, ever. This is the same coach who, when the kids are being particularly slow to do what they're told or totally ignore instructions, the worst thing he ever says is "You all are being a bunch of lemons!" Anyway, I thought it was funny, and so did the kids.