First, a funny story that makes me think of all the members of Clan Meadors:

I had a moment at work yesterday when it was like Mr. David was inside my head. The engineer I don't get along with very well is investigating the cause of a fatal car wreck. It is believed one of the metal parts failed (that's where my company's expertise comes in) causing the wreck. As he passed by, the engineer was muttering something about "dead men tell no tales". Suddenly, it was as though David was sitting right there beside me, because I could hear his voice clearly in my head. "If a dead man speaks, there's a good possibility that he isn't quite dead." I started laughing and said that to the engineer. I think he thinks I'm a bit off my rocker now.

Now a funny cartoon that makes me think of you all: 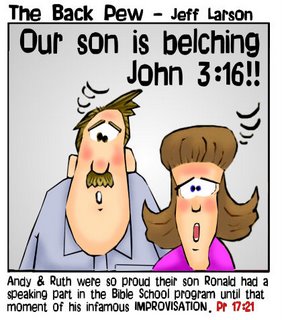 P.S. I hope you realize that you don't necessarily have to have the last name "Meadors" for me to consider you part of Clan Meadors. Much like the Scots, I consider David and Susan to be the Clan heads, and the rest of us have been either birthed into or adopted as part of the clan family. But now I'm starting to wonder what our tartan would look like...
Posted by Jenn-Jenn, the Mother Hen at 11/09/2006

Sorry, but when you mention Clan, my brain goes to one place--

There can be only one!

If a person could get into that cartoon and change the text, it OUGHT to say, "Our daughter is belching John 3:16!" Everett isn't nearly that talented.

I believe the Irish part of the Scots/Irish Meador ancestors would probably be disappointed that we are considered a clan with a tartan. Anyway--we love you Jenn! and we are glad we adopted you and your son!

I must confess I thought more of Ann when I read that than I did Everett. And so far as a tartan goes, I'm thinking it would be rainbow stripes, not a plaid. And what is the symbol of an Irish clan? And we're glad you adopted us, too! Much love!!

And Becca - "I am Duncan McCloud of the Clan McCloud!" Saw a re-run of that on TV the other night. Would you believe my friend Rachel has never seen ANY of the Highlander movies??!?!?!?! Poor girl! I'll have to educate her soon!!!

You can be Duncan, but I'll be Connor.

Rachel must see at least the first movie. Everyone should see that movie. I still have my "A Kind of Magic" tape around here somewhere--Jay hates it when I break out into "Princes of the Universe", complete with the dialogue, at odd times of the day.

And a tartan with rainbow stripes? Are we the first gay clan?!?

I wasn't thinking of the Rainbow Coalition so much as The Care Bears. You know - love, rainbows, happiness, caring, sharing, friendship, and just a little goofiness, etc.?

And you can be Connor if you want to. I always thought Adrian Paul was better looking than Christopher Lambert anyway. LOL!
But if I had my druthers, I'd be Sean Connery's character!!!! He's like good wine, he just keeps getting better with age!

Ah, but wine does sour eventually.

Rainbow is my favorite color.

I love rainbows, too. Annie-lou, whyfore you don't answer your phone? I've tried to call a couple times and keep getting voice mail.

Annie is sick. She has first-year teacheritis. It's where you catch everything the kids have. She probably isn't talking to anybody on the phone right now.

As to the clan's ancestry and tartan, which is part of the subject of this post: David said either Friday or yesterday, one of othose days when we were spending hours in the car, that the Meadors were English. I know his mom was of English descent, as well as his dad. His mom did have the misfortune to be a Steenrod, which is probably German.

My dad's family were English on his father's side and Scots on his mother's side--her maiden name was Martin. On my mom's side, I was Tincher (which I think is Irish), and Brumback, which I am reasonabley sure is German. And there you go--that's the geneology.

By the way, the tartan is probably dookie brown.